THE NEW TESTAMENT  in Chronological Order 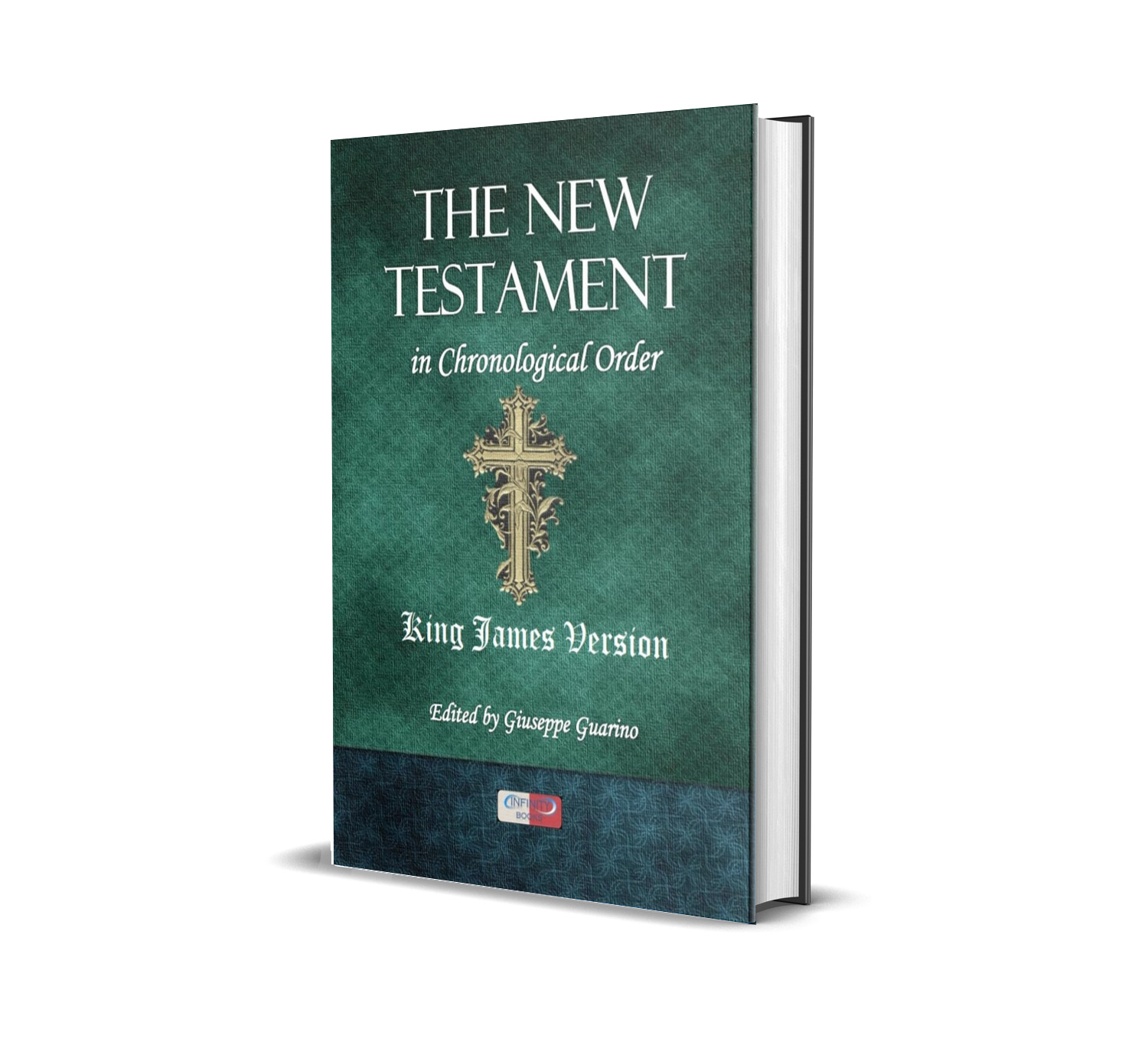 The following is the Introduction to the above version of the New Testament which has the 27 books arranged in chronological order.

We all know that the books in our Bibles are not arranged in any particular order. In particular, no discernable criteria can be distinctly identified in the way the New Testament books are presented.

Paul himself promoted this habit among the churches.

“And when this epistle is read among you, cause that it be read also in the church of the Laodiceans; and that ye likewise read the epistle from Laodicea” (Colossians 4:16).

The epistles to the Thessalonians are the earliest written by Paul. It is noteworthy to read there,

“Now we beseech you, brethren, by the coming of our Lord Jesus Christ, and by our gathering together unto him, That ye be not soon shaken in mind, or be troubled, neither by spirit, nor by word, nor by letter as from us, as that the day of Christ is at hand.” (20Thessalonians 2:1-2)

Some one must have tried to write a letter or letters and make believe they were written by Paul.

“Now concerning the coming of our Lord Jesus Christ and our being gathered together to him, we ask you, brothers, not to be quickly shaken in mind or alarmed, either by a spirit or a spoken word, or a letter seeming to be from us…” (2 Thessalonians 2:1-2)

It looks like a negative thing. It is. But not entirely. In fact, for this reason the Church must have soon felt the importance to develop a critical spirit in order to identify the authentic and discard the spurious.

“See with what large letters I am writing to you with my own hand” (Galatians 6:11).

The matter with the Galatians was so important that Paul himself wrote this letter, so that there could be no doubt about the authorship of its content.

We understand that Paul must have dictated other epistles instead of personally write them. In fact he made sure to put his personal seal to confirm his authorsip. See  1 Corinthians 16:21, Colossians 4:18, 2 Thessalonians 3:17, Philemon v.19.

Going back to our main theme, chronology, we must say that Mark and Luke must have been written very early. Though many still believe that Matthew was the first of the Gospels to be written. Many also believe the original version of this book was in Hebrew and that only later a Greek version appeared on the scene to complete the narrative of the other two gospels already mentioned. The three would be called Synoptics, because of the clear resemblances among them.

The other “books” came later.

Imitating the Canon of the Old Testament was inevitable. The Church had to have, like Israel, their own Scriptures to state and proclaim the Truth of the Gospel. It was natural for the Church to choose among the many writings produced in the first century and retain the authentic. It was very soon clear that the main characteristic of the Old Testament was true for the apostolic writings too, they are the inspired Word of God.

“… even as our beloved brother Paul also according to the wisdom given unto him hath written unto you; as also in all his epistles, speaking in them of these things; in which are some things hard to be understood, which they that are unlearned and unstable wrest, as they do also the other scriptures, unto their own destruction.” (2 Peter 3:15-16)

I believe the apostles had a clear understanding of how to make sure the Truth could be preserved and handed down to future generations.

“Yea, I think it meet, as long as I am in this tabernacle, to stir you up by putting you in remembrance; Knowing that shortly I must put off this my tabernacle, even as our Lord Jesus Christ hath shewed me. Moreover I will endeavour that ye may be able after my decease to have these things always in remembrance.” (1lPeter 13-15).

The apostles took their ministry very seriously – they even paid their faithfulness to Jesus’ mandate with their lives, sealing their witness by their blood. They made sure their report would not be lost or corrupted by false witness, when they would go. Evidence of their love for Truth and wise conduct is in your hands every time you read the New Testament.

In this edition of the New Testament, we plan to present the books arranged in a chronological order.

Though no exact criteria can be seen in the way the books are usually arranged, we believe it is as good as any other and it is by no means binding.

For the Old Testament, Christians and Jews adopt two different ways of collecting the books. The writings are the same, but arranged with a totally different logic. The Jewish canon has Law, Prophets and Writings[1]. The Christian canon has the Law, historical and poetical writings, and the prophets, major and minor.

Basically, somehow the same logic of the Christian Old Testament was imitated when arranging the books of the New.

The Gospels come first. They are followed by the Acts of the Apostles. Then we find the epistles of Paul and the so called general epistles by James, Peter, Jude and John. The book of Revelation closes the Christian canon and is the last book of the Bible.

Can we try to put these same books in a chronological order?

This will be very profitable for the epistles of Paul, even for exegetical purposes. So, this is where we start to look for the chronology of the books of the New Testament. Since, the book of the Acts of the Apostles and the details found in the epistles themselves give us a reliable starting point to determine when was written what.

This is the most probable order of composition of Paul’s epistles.

Of course, since the books of the New Testament were not dated, we cannot be dogmatic on our arrangement. What I propose here is a possible reconstruction.

My work is inspired by the ideas expressed by J. B. Lightfoot in his commentaries on the Greek text of Galatians and Colossians in particular.[2]

I also took into consideration internal evidence, using as best as I could my personal acquaintance with the New Testament. Of course, I took into consideration the writings of the so called Fathers of the Church and Eusebius’ Ecclesiastical History in particular. Modern authors were considered too, but, I am even sorry to say, I cannot agree with a liberal view and approach to the New Testament, or the date of its composition given by certain scholars.

Concerning the Gospels of Mark and Matthew, I have been strongly influenced by the amazing work of Jean Carmignac, The Birth of the Synoptic Gospels. He is absolutely right in seeing how dependable the Synoptic were from the Hebrew language. I do not agree totally with all his conclusions, but the strong semitic element agrees with placing the composition of the Gospels at a very early stage of Christianity.

I wrote a book on cave 7’s Greek manuscripts at Qumran. 7Q5 is a fragment that Josè O’ Challagan first identified as the few lines surviving of a copy of the Gospel of Mark. Many other scholars followed in O’ Challagan’s footsteps. Thiede, Montevecchi, just to name two. If 7Q5 is really a copy of Mark, this means this Gospel cannot have been written later than 50 AD, which is the latest possible dating given by scholars for this fragment. For sure, historically speaking, it could have never been copied later than 68 AD, because by that time the site was abandoned because of the Romans attacks that led to the distruction of the temple and the city of Jerusalem in 70 AD.

2 Corinthians 8:18 [3] identifies Luke as “the brother, whose praise is in the gospel throughout all the churches.” (KJV)

This passage can also be translated “the brother, whose praise is because of the Gospel throughout all the churches.” Some versions prefer not to be so literal and render the Greek as follows: “With Titus we are also sending one of the Lord’s followers who is well known in every church for spreading the good news.” (CEV) This is not a translation but an interpretation. Another version: “the brother who is famous among all the churches for his preaching of the gospel.” (ESV).

The literal version is the correct one. Luke was never famous for the preaching of the Gospel. Nowhere in the New Testament we read of any specific ministry he had. He is said to have accompanied Paul in his journeys. On the contrary, Luke’s Gospel, written Gospel, was very famous among the Gentiles, to whom it was clearly addressed. The reason why some translations render this passage in a non-literal way is to avoid the possible understanding of an early date of Luke, usually dated by critics much later than the Christian tradition always affirmed. Also, another objection is connected to the possibility of such an early use of the word “gospel” to describe a written account of the life and ministry of Jesus. Well, this could as well just be evidence of an early accepted way of using this term.

In short, critics cannot determine interpretation or translation of a passage to suit their theories. But, theories must be formed giving the Bible the credibility it diserves. And the New Testament here says openly that the Gospel of Luke was already written and known among Christians.

The New Testament as we know it is the result of a close scrutiny of the early Church, which, it is true, was made of local, independent churches. But, at the same time, they were all well connected and able to carry out the task of preserving the Truth, isolating and rejecting the lies. Only the Church of the first centuries was in a position to successfully adopt as Canonical the authentic, inspired books of the new covenant and reject the spurious.

The statement we find at the end of our Bibles, somehow can be extended to the Scriptures in general:

For this edition of the New Testament we chose the King James Version, probably the most elegant and reliable version of the Bible in English ever printed. It is literal, which is very important. It was not influenced by this or that current of thought. I believe this is vital.

I understand the English of this Bible is not modern and some parts of it may be a little difficult to understand, obscure for today’s English speaking people. But it is worth the while to try to dive into it and enjoy a literary masterpiece, because that’s what it is. Eventhough I am not a native speaker, I love the English language and this version is an unsurpassed masterpiece.

I am sure God will bless the reading of His Word to those who approach it with a sincere heart, aware of its nature and purpose.

[2] Both recently reprinted by Infinity.