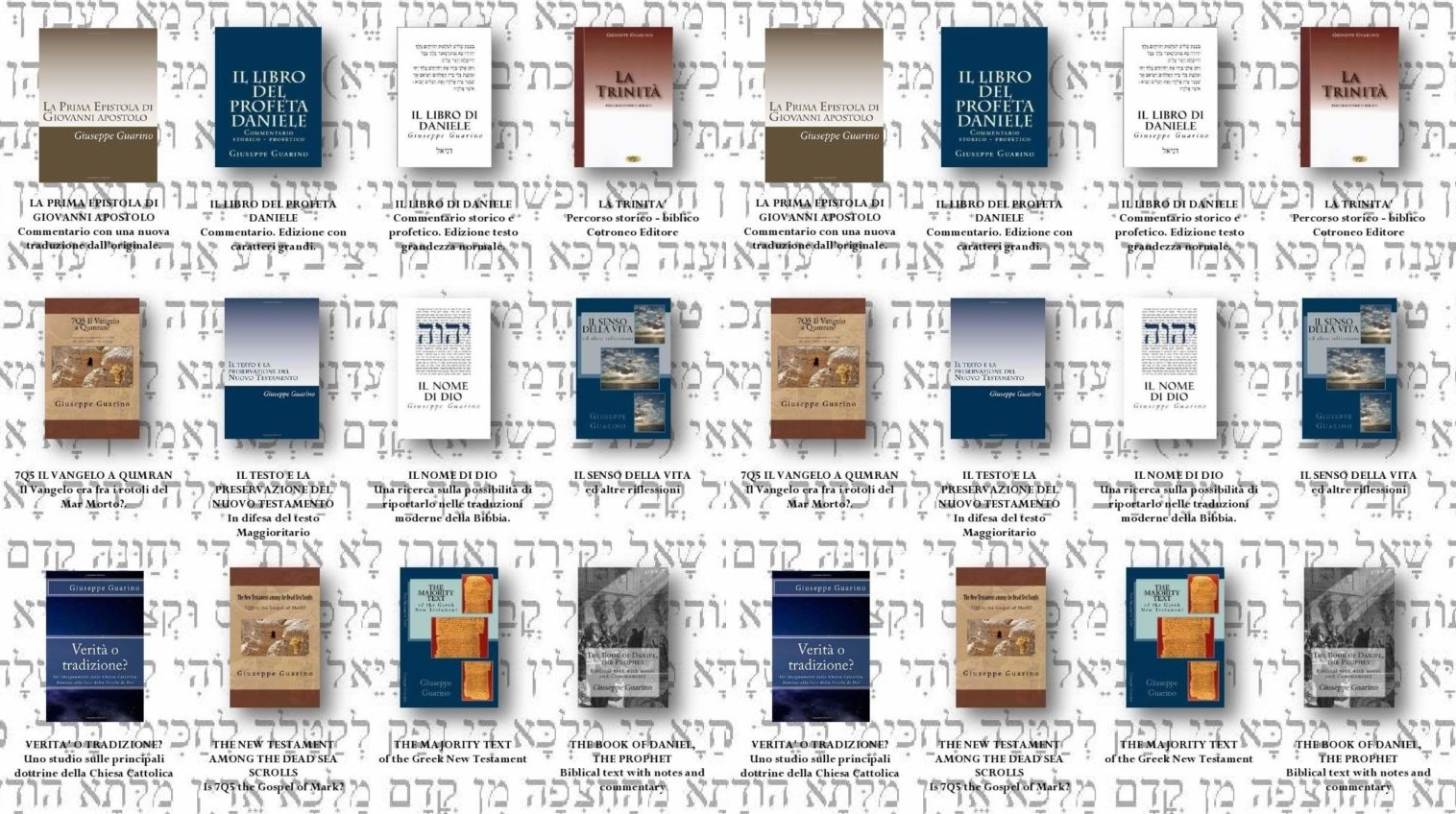 All my books are available on Amazon, both as paperbacks and as e-books.

If you are not able to buy the books, for whatever reason, and you think they might be important in your study of the word of God, email me (guarinous@yahoo.com) your request, and I will send you a pdf file of the book.

Giuseppe Guarino is co-founder of Infinity Books and a writer himself. He writes both in Italian, his native tongue, and English. Here are some of his books in English published with Infinity. You can either order the book from Infinity (infinitybooksmalta@yahoo.com) or click on the cover to buy it on Amazon – wherever you are in the world!!! This book about Malta is in color with many pictures of this wonderful island. If you like to travel and you read it, I am sure you will come visit  Malta.  https://www.amazon.com/dp/1092320857 The history of the transmission of the text of the New Testament is a fascinating subject. But it is more than a simple subject or an interesting matter. Understanding how we got our Bible and how reliable is its text becomes a vital topic when we believe it is the Word of God. The Bible is inspired and God has preserved its text down through the centuries. Faith believes it and evidence proves it. This book proves the case for the superiority of the so called Majority Text of the original Greek New Testament, called also Traditional or Byzantine. It is the author’s conviction that the Majority of the manuscripts of the original apostolic texts must be viewed as the result of the faithful copying tradition started with the autographs down to our days.  https://www.amazon.com/dp/1708744711 Discoveries like the Dead Sea Scrolls made it clear that in order to better understand the New Testament, it is necessary to seriously consider the language and culture of those through whom it was written. The New Testament did not betray, but embraced and gave the world the riches of the Jewish religion. Its authors interpreted from their original language thoughts, sayings, accounts or even written documents. So deep was their Jewish background that when they could not find an equivalent for some Hebrew words or expressions, they thought well to keep them in their Greek autographs. This use has influenced the language of churches down to our days: Christians everywhere end their prayers with a Hebrew word: “Amen.” They shout to God: “Hallelujah.” They call Jesus the “Messiah.” The Jewish background of the New Testament is a fascinating and important topic to investigate. https://www.amazon.com/dp/170867165X This book is a manual on Biblical Greek written for English speaking Christians. The method of study proposed is very simple and practical, so that the students may be equipped with information and terminology that will let them benefit as quickly as possible of the original text of the New Testament. The attention will be focused on the first epistle of John. Its first chapter will be our reference throughout the book. The reason why John’s writings are the best to introduce Biblical Greek to the student is that they have two wonderful characteristics: 1. John used about one thousand words only to write his first epistle!2. Notwithstanding the simple language used, fist John is full of theological treasures. https://www.amazon.com/dp/1708662294 We got the New Testament in an “original” Greek. The Author was recently confronted with some claims that Greek was not its actual language of composition. Then he asked himself: were the autographs of the New Testament actually written in Greek or Hebrew, Aramaic, or whatever language or dialect was spoken by the Jews in Israel during the first century? He investigated the matter and found enough reasonable evidence to come up with convincing ideas. They are collected here, hoping they will be a satisfactory answer to those interested in this challenging question. https://www.amazon.com/dp/1708735585 Sometimes evidence of the past may be huge, majestic, like the Egyptian pyramids. Other times it is all hidden in small fragments. Then it all depends on man’s deductive ability to reveal the truths hidden in the surviving evidence. The latter is the case with the manuscript fragment called 7Q5 – which stands for relic 5 of cave 7 in the Qumran site. Many have tried to understand what 7Q5 actually bears witness to. I am sure many have spent sleepless nights trying to understand if it is possible to prove what was the content of the original complete manuscript – I am one of them. I felt the need to find answers to the puzzling questions that 7Q5 arises and share them with others. There are too many reasons to study the Bible to be listed in just one article. But the main reason why we need to read and study the Word is, to say it with Jerome, the Church Father of the fifth century, that the ignorance of the Scriptures is ignorance of Christ. The Word of God will comfort us, sustain us, give us peace, understanding, awareness, instructions. It is indeed a secure manual to effectively live all the blessings that God has in store for us. Without constant reading and studying of the Holy Bible a Christian can never hope to really know who he is in Christ and fruitfully live his faith. https://www.amazon.com/dp/1709323744 The New World Translation (NWT) is the official translation of the Bible released by the Watch Tower, the Jehovah Witnesses’ Directive Body. It’s first English edition was presented to the public in 1950. The latest updated edition is the 2013’s, now available online. It is a very peculiar version of the Bible. In this book I will direct the readers’ attention to the evident mistakes that make of the NWT a unique literary phenomenon among the various attempts of translating the Bible. These mistakes are so many and so misleading on certain specific doctrines that I cannot help but wonder if we are looking instead of a translation at a deliberate attempt to manipulate the text of the Scripture. This the readers will judge by themselves. https://www.amazon.com/dp/170927106X The book of Daniel is a very important book. His prophecies speak of the first and the second coming of the Messiah. The kingdom of heaven proclaimed in the first pages of our Gospels is a direct quotation of a concept found in Daniel. Jesus himself refers to this wonderful book and its author in his prophetic sermon. If we are interested in end-times prophecies, Daniel is the book we need to start with. This commentary is also historical. The attacks against the authenticity and historical accuracy of Daniel by the liberals must be considered outdated and untenable and evidence will be provided in this book to prove such a bold statement. The history of the transmission of the text of the New Testament is a fascinating subject. But it is more than a simple subject or an interesting matter. Understanding how we got our Bible and how reliable is its text becomes a vital topic when we believe it is the Word of God. The Bible is inspired and God has preserved its text down through the centuries. Faith believes it and evidence proves it. This book proves the case for the superiority of the so called Majority Text of the original Greek New Testament, which some call also Traditional or Byzantine. It is the author’s conviction that the Majority of the manuscripts of the original apostolic texts must be viewed as the result of the faithful copying tradition started with the autographs down to the middle-ages.  https://www.amazon.com/dp/9995715155

Houses and wealth are inherited from parents, but a prudent wife is from the Lord.
Proverbs 19:14