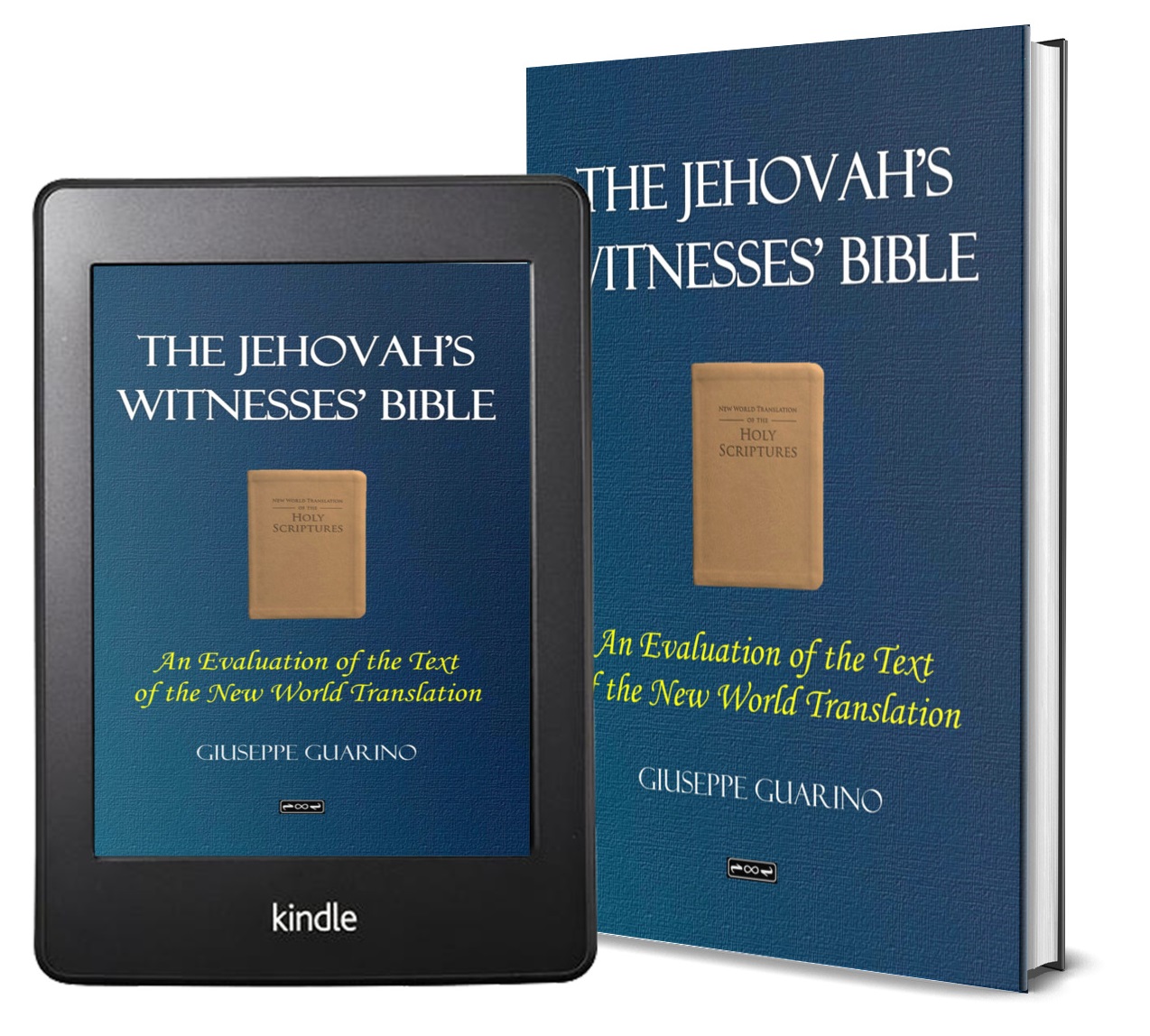 The book can be bought on Amazon

INTRODUCTION (from the book)

The New World Translation (NWT) is the official translation of the Bible released by the Watch Tower, the Jehovah’s Witnesses’ Directive Body. The first English edition was presented to the public in 1950. The latest updated edition is the 2013’s, now available online.

It is a very peculiar version of the Bible.

In this book I will direct the readers’ attention to the evident mistakes that make of the NWT a unique literary phenomenon among the various attempts of translating the Bible. These mistakes are so many and so misleading on certain specific doctrines that I cannot help but wonder if we are looking instead of a translation at a deliberate attempt to manipulate the text of the Scripture. This the readers will judge by themselves.

In the first part of the book I  will focus my attention on the New Testament passages where the Deity of Jesus has been removed or made obscure, considering as simply as I can the grammar of the original Greek text of the New Testament.

In the second and fourth part I will discuss the critical text adopted by the NWT and its choice to include the name of God, Jehovah, in the New Testament.

The third part will be a quick look at passages in the NWT which still bear witness to the deity of Jesus.

My goal is to make this work a quick reference book and a tool in the hands of the believer whenever Jehovah’s Witnesses will knock on their doors so that he or she will be able to answer to their false pretenses on the New World Translation reliability.

The info I collected and used here comes from the very good official website that the Watch Tower has built, www.jw.org, which is absolutely very useful for quick access to information that in the past was very hard to collect.

May God help us not to be arguers only, but good witnesses of His grace.

In this first section I will discuss of those Bible passages which clearly teach that Jesus is God in the original Greek but that the Watch Tower has not translated accurately, altering the simple truth they reveal, in order to better substantiate their unscriptural position on the person of Jesus.

I will evaluate these passages in the light of my experience on the original text of the New Testament, quoting, when necessary, from grammars and manuals.

The critical text that I will use as a reference is the The Greek New Testament According to the Majority Text edited by Zane C. Hodges and Arthur L. Farstad, Thomas Nelson Publishers, Nashville. Anyway, most of the passages I quote in this study are the same with the prestigious Nestle-Aland text, which the JW seem to be so fond of.

For the English text I will use the New King James Version as a constant reference, but honestly, concerning the Deity of Jesus, I might use any other Bible translation, both old and new.

One important detail is that, up until now, the Watch Tower has not released an official grammar for the New Testament Greek. This is why, absurd as it may seem,  they quote from grammars and texts that ultimately contradict or do not share their views.

It is incredible how they extensively quote Harner in a passage where, if read all, he affirms the divinity of the Son of God. Just like they quote Howard to motivate their inclusion of Jehovah in the New Testament – notwithstanding the fact that he has openly asked the Watch Tower to stop misusing his studies.

Just as the Son of Man did not come to be served, but to serve, and to give his life as a ransom for many.
Matthew 20:28