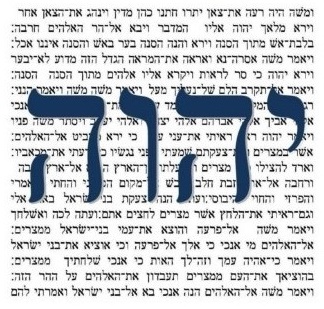 The difficulties connected with the personal Name of God revealed to Moses (Exodus chapter 3) are as old as the need to translate the Old Testament in another language.

The oldest known version of the Hebrew Bible is the Greek translation, the Septuagint, LXX. This version – originally of the Pentateuch only – was sponsored in the third century BC by the Egyptian ruler Ptolemy Philadelphus to enrich the library of Alexandria. The name (meaning Seventy) derives from the legendary original number of translators engaged in this work.

There are controversial ideas as to which path the LXX took concerning the Name. Some argue that the translators preferred to keep the Tetragrammaton, God’s Name, in its original Hebrew form, and simply inserted it into the Greek text. Others argue that the original translation had Kyrios (ie “Lord”).

Whatever the initial choice of those translators was, the difficulty of transposing from the Hebrew into another language such a precious word as the Personal Name of God is evident.

What is the best choice?

When God appeared to Moses, he said to him,

If God says in the first person that he is: “the I AM”, the others will have to turn to him calling him: “ י ה ו ה , the God of your fathers, the God of Abraham, the God of Isaac and the God of Jacob has sent me to you.”

הוהי is the way in which the name revealed to Moses is represented in the Hebrew alphabet. It identified the God who sent him to his people to deliver them from Egypt.

Hebrew is read from right to left. So if we want to transliterate the Hebrew letters in our alphabet, we will have:

Hebrew is written from right to left. So, applying our common sense of writing, we have: YHWH.

The four Hebrew consonants could also be transliterated with the following letters: IHVH, JHWH, or JHVH.

The “y” must be preferred to the “j” and “i” because the “j” has lost the original sound of “long i” in favor of the Anglo-Saxon valence of “g” and the “i” expresses the sound of the Hebrew letter but not the consonant valence, which instead happens with the “y”.

The “v” renders the phonetic value of Hebrew better than the “w” does, though “w” is a more correct way to transliterate.

Depending on the various texts that are consulted, one can find a version or another of the transliteration. The simple truth is that, as it is sometimes the case when translating from one language into another, no one can be dogmatic and different transliterations, for different reasons can be considered equally effective alternatives.

The four letters that together make up the Name of God in the Old Testament are commonly referred to as the Tetragrammaton (from the Greek tetra grammaton, which means four letters).

In the Hebrew alphabet (we will say for simplicity) vowels are missing. It is made up of only 22 consonants. The discomfort that can follow is easily understood and the correct pronunciation of words is linked to the teaching of one generation to the next of the way a word must be read.

The 22 consonants of the sacred text were considered too holy to even evaluate the possibility to transliterate them into another alphabet. So, the Masoretes, Jewish scholars of the first centuries, added some symbols, which helped the pronunciation of words.

The was vocalized as follows:

While in the vast majority of cases the symbols provided by the Masoretes would give the reader the necessary vowels to be added to the consonants in order to determine the pronunciation of the words, for the Tetragrammaton scholars speak of qere perpetuum, that is, of “permanent corrections, not shown in the margin but inserted in the text through an anomalous vocalization”[1].

This happened because when the Masoretes added their vocalization, the Orthodox Jews had long ceased to read the Tetragrammaton, preferring to pronounce in its place the word “Adonai”, corresponding to the English “Lord.” The vowels of Adonai were then those added to the consonants of the divine name for the vocalization.

In the 16th century, a German scribe who was transliterating the Bible into the Latin alphabet for the Pope simply interleaved the vowels with the consonants resulting in the reading  Iehovah.[2]

Later (in 1611) the King James Version of the Bible, introduced the reading Iehovah. This, with the evolution of the English language, became Jehovah by many still considered the pronunciation par excellence of the name of God. For sure, it is the most commonly known and used.

The affection that binds Anglo-American Christians to Jehovah has generated several attempts to systematically use it in biblical translations.

In 1901 the American Standard Version, used Jehovah in all the places where the Hebrew original of the Old Testament had the Tetragrammaton.

In the 1960s, Jehovah’s Witnesses produced their own translation of the Bible which introduced Jehovah into both the Old and New Testaments.

There have been versions of the Bible that have adopted various readings/transliterations, the most famous of which is probably Yahweh, that many scholars believe to be the correct way to pronounce the Name.

In Italy, my country, a translation of the early 1900’s, Riveduta Luzzi, came up with a peculiar solution. They translated the Name as “the Eternal” in a consistent way, throughout the Old Testament. I once thought this solution was totally crazy. But with a better knowledge of the original I have certainly changed my mind. The reasons are explained very well by Asher Intrater, in his book “Who ate lunch with Abraham?” Asher basically says – and he is a Jew and a Hebrew scholar – that  the three vowels e, o, a, added by the Masoretes for the reading of   הוהי are a verbal structure. The e (sh’va) indicates the future versal tense, the o (holom) the present and the a (patach) the past, giving the name YeHoVaH the meaning of “He will be, He is, He was,” in other words, the Eternal. I strongly suggest you get a copy of this great book. It is a masterpiece.

Today’s Italian version The New Diodati adopts this reading for the Old Testament occurrences of the Name.

“The Eternal” is a peculiar choice that seems to be exclusively and Italian phenomenon. The reason why I am calling this to the readers’ attention is that this use of the term “The Eternal” is not totally destitute of biblical foundation. I will say more later about this fascinating topic.

Anyway, the reading Jehovah and its variations, Yehovah or Yehowah, cannot be considered the right representation of the sound of the original Name, simply because the vowels inserted are those of a qere perpetuum that invite the reader to read out lout Adonai, Lord, when the Name of God is the the text.

We must be honest. Being often confronted with problems in translating from one language to another, I know: the translation of the Divine Name of Exodus 3 and following is a serious problem. Those who propose easy ways out do it only to please the public, but do not solve or even face the problem, they oversimplify the matter in order to achieve their own goals and follow their personal agenda.

What should we do when translating the Old Testament into another language?

We could just leave the original four Hebrew letters, as we find in some manuscripts of the ancient Greek version of the Septuagint. The problem, however, remains: how should we read it? Those who put the Name in the Hebrew alphabet in the LXX were – no question about it –  Jews and thinking of Jewish readers of the Sacred Text. Their purpose was not proselytism outside of the Jewish circles. Their text would be read by people who knew they should pronounce the Name Adonai.

No translation from one language to another, and this applies to 100% of the cases, will be able, in several points, to perfectly render all the nuances of one language into the language in which it is translated.

This is also the case with the Name revealed by God to Moses, as well as other names of God given in the Bible. For example, “Lord” is the way we translate the Hebrew אדני, Adonai. Yet, just like אלהים, Elohim, which we translate God, is a plural form. This is peculiar of the Hebrew language and can’t be rendered in English. Also “sky” and “water” just to name two other examples are plural in Hebrew, but translated in the singular in English – see Genesis 1:1.

The very idea of ​the “name,” of a person or a thing, in Hebrew is not the same as that which conveys the term “name” in our language.

Many, if not all, of those who call God Jehovah do so with the Western idea of ​​“name” in mind. That is why they are only incidentally bothered by the fact that Jehovah is not the real name of God, that it is not the way the Tetragrammaton was actually pronounced.

Although for us Gentiles, foreigners, is quite hard to swallow, הוהי is the exclusive patrimony of the original text of the Tanakh (the Old Testament), something that belongs to the Hebrew culture and language.

Most of the various attempts to recover in the translations the greatness of the biblical original of Exodus 3 and of the other references to the Tetragrammaton have merits, but they fail to convey the entirety of the meaning of the original to the reader who will not go to study firsthand the original languages ​​of the Hebrew Scriptures.

I may be quite unpopular to say this, when we use Jehovah, we cannot think of this as God’s Name. It is an English word created ex-novo to translate the Name and pronounce it in a way we can as we speak English. It is quite handy. Yet, we must be aware that it is as good as any other English word we can try to use to render the Name. I believe the same applies to Yahweh.

Personally, as a translator, I believe that if we use “Lord” or “LORD” we give credit to the choice made by the Jews themselves, who, out of respect for the holy Name of God, avoid its pronunciation – who are we Gentiles to judge them concerning this matter?

Using “Lord” we also follow the lesson of the first translation of Torah ever, the Septuagint, and we are perfectly aligned with the Greek New Testament use in quoting the Old Testament.

This article is the Introduction to my new book, THE NAME OF GOD 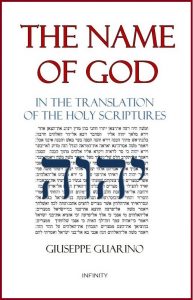 Do not be overcome by evil, but overcome evil with good.
Romans 12:21