The book of Daniel and the Dead Sea Scrolls

In 1947, a young shepherd made the discovery of the century: in a cave near the Dead Sea he found a scroll. From that year on to 1956, eleven caves were discovered. They brought back to light hundreds of Old Testament manuscripts, along with a large number of other writings. Though not unanimously accepted, the writings were probably connected to the Jewish monastic, possibly Essenes, community which dwelt at Qumran. All agree in the fact that the caves were sealed and the site abandoned in 68 AD, and that the manuscripts in them could not have been written after that date.

The magnitude of such a discovery is undeniable. From the very first moment, even the newspapers around the world began to show interest in the Scrolls.

The reason is very simple. Up until then, the Old Testament manuscripts adopted for the critical editions of the original Hebrew were dating about a thousand years after Christ, in that form of text called the Masoretic. Such a late date of the witnesses had facilitated the task of those who desired to attack the accuracy of the Bible. The Dead Sea Scrolls gave the world witnesses to the Old Testament text about a thousand years older.

The book of Daniel was among the Scrolls.

Its presence is not secondary. At least eight manuscripts were in the caves. Fragments of the book of Daniel have been found in cave 1, 4 and 6.

The following are the mss ascribed to the Hasmonean period (150-30 BC) and their contents.

The following are those ascribed to the Herodian period (30 BC – 68/70 AD) and their contents.

If critics believe that the position of Daniel among the Writings in the Jewish Tanakh (Old Testament) is a sign of its late composition, they should admit that his presence at Qumran is overwhelming evidence that the opposite is the case.

First of all, the Writings are considered inspired by the Jews as well as the other canonical books. Second, Daniel is definitely quite different than the other prophetic books. It does not take an expert to see this; a quick reading will reveal: there is a long narrative portion in the book, including Chapter One and Chapters Three to Six. Even the rest of the book speaks of the visions given to Daniel and not of prophecy in the manner we find it in Isaiah or Jeremiah.

But the death blow to the misconception about the late reception of the book in the Jewish canon – if necessary – comes right from the Scrolls. In fact they witness to the existence of at least eight manuscripts. Jeremiah was found in 6 manuscripts – a higher rate of presence than Joshua, Job, Proverbs, Ruth, Ezekiel, Numbers, etc. The books of Moses are best represented, along with the book of Psalms (36 copies) and Isaiah (21). Then comes Daniel. This is clear, objective evidence of Daniel’s rightful place among the inspired Jewish Scriptures.

In 4Q174 Daniel is mentioned and openly referred to as “the book of Daniel, the prophet” along with other Midrashic material of the books of Psalms and Samuel.

Concerning the state of the text, there are more remarks of great interest to be made.

The manuscripts confirm the traditional, bilingual composition: Hebrew and Aramaic. The places where the book switches from Hebrew to Aramaic and then back again to Hebrew are confirmed.

The copies of Daniel at Qumran did not contain the (late, Greek) additions found in the LXX (Septuagint) versions of it, which are not retained in the Protestant and Jewish canon.

Considering that a thousand years spans between the manuscripts on which the Hebrew text translated in our Bibles today is based and those found at Qumran, it is worth notice that “the chief differences, like those in the Isaiah manuscript, have to do with the spelling of words.” G. Ernest Wright, Biblical Archeologist, (No. XII, 1949).

It is incredible that a book should be copied for a thousand years and remain virtually intact.

“Despite the fragmentary state of most of Daniel scrolls, they reveal no major disagreements against the Masoretic Text, although individual readings differ on occasion.” Peter W. Flint, The Daniel Tradition at Qumran in Studies in the Dead Sea Scrolls and Related Literature, Wm. B. Eerdmans Publishing Co., Grand Rapids, Michigan.

Individual readings, as well as small variations in the spelling and other minor differences, only make the Scrolls’ witness to the book of Daniel more relevant: agreeing, independent witnesses are very reliable.

Frank Moore Cross dated 4QDANc to the late second century. This is the oldest existing fragment of the book, almost a deathblow to the Maccabean theory of the composition of Daniel. It is quite improbable, if not impossible, that the book of Daniel was written in the second century and that in such a short length of time it would gain acceptance as an inspired book.

We can fairly conclude that the early date of the witnesses at Qumran, the large number of copies of the book, and the consideration it had as Scripture is all evidence against the late dating of the book and in favor of the traditional view. 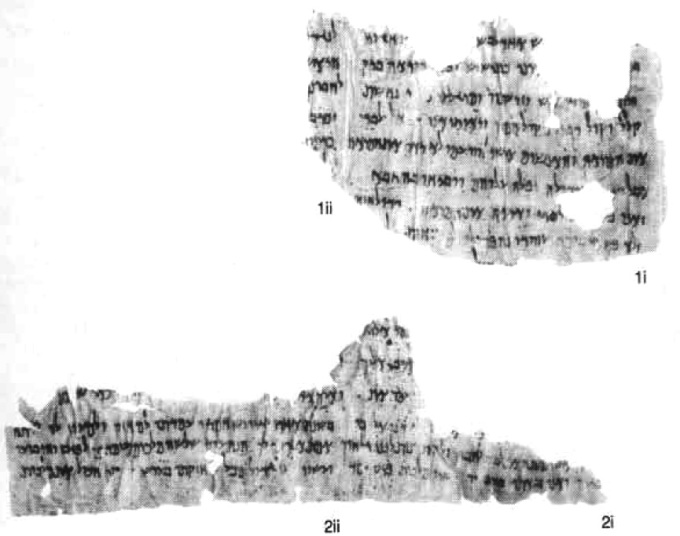 Picture from www.biblearcheology.org where you can read a very interesting article

They replied, “Believe in the Lord Jesus, and you will be saved—you and your household.”
Acts 16:31