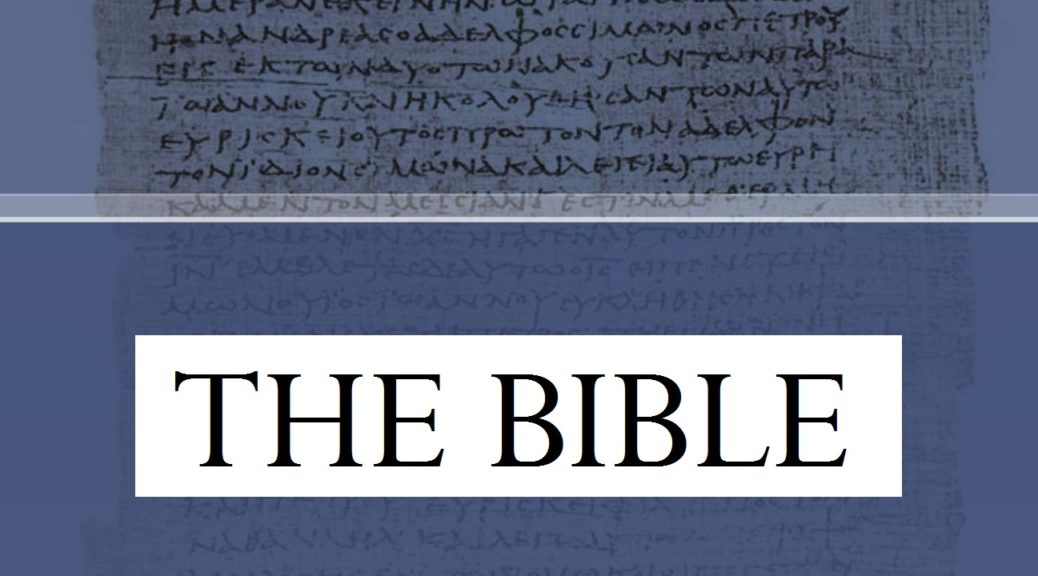 Some time ago … Well, quite a while ago now, I had a problem with the length of my writings. Till I heard an expert on TV explaining that a huge book is only a collection of independent small chapters all connected together to create the final, complete book – whether it be a story, a novel or a manual.

Can we believe the same thing to have taken place with the Bible?

It is easy to come up with the conclusion that the special assistance of the Holy Spirit has made all those independent writings truly One Book! Which, to my opinion, is another strong evidence of the active presence of God in the pages of the Bible, from Genesis to Revelation, so that it actually and truly is The Word of God.

Let us see what I mean to say.

“And I will put enmity Between you and the woman, And between your seed and her Seed; He shall bruise your head, And you shall bruise His heel.” (Genesis 3:15 – NKJV)

It is with right that this particular part of Scripture has been considered the first time the gospel – the good news – was ever proclaimed. Technically speaking, it has been rightly termed the protoevangelium. The classical, and I would say even the obvious interpretation of this passage is that the seed of the woman is Jesus, who bruised the head of Satan, though he had to endure the cross to save us, before rising and conquering death and the grave.

Genesis 22 is another amazing prophecy concerning the person and the atoning death of Jesus.

The Lord asks Abraham to sacrifice his only son. He is obedient and so he goes on a mountain with Isaac to obey God’s voice.

“Take now your son, your only son Isaac, whom you love, and go to the land of Moriah, and offer him there as a burnt offering on one of the mountains of which I shall tell you.” (Genesis 22:2 – NKJV)

“So Abraham took the wood of the burnt offering and laid it on Isaac his son.” (Genesis 22:6 – NKJV)

Can’t we see in this a type of Jesus, who almost two thousand years later would have carried the wood of the cross?

So many coincidences can’t be a coincidence. It’s all part of a design and evidence of the Divine Inspiration of the Bible. It is so evident that Abraham prophesizes the coming of Jesus, the lamb of God, whom God provided for himself! (John 1:36)

The precious work of Jesus on the cross, which brought salvation to all those who believe, was also so clearly seen and described centuries before, in the pages of the book of Isaiah.

“Who has believed our report? And to whom has the arm of the LORD been revealed? 2For He shall grow up before Him as a tender plant, And as a root out of dry ground. He has no form or comeliness; And when we see Him, There is no beauty that we should desire Him.3He is despised and rejected by men, A Man of sorrows and acquainted with grief. And we hid, as it were, our faces from Him; He was despised, and we did not esteem Him.  4 Surely He has borne our griefs And carried our sorrows; Yet we esteemed Him stricken, Smitten by God, and afflicted. 5 But He was wounded for our transgressions, He was bruised for our iniquities; The chastisement for our peace was upon Him, And by His stripes we are healed. 6 All we like sheep have gone astray; We have turned, every one, to his own way; And the LORD has laid on Him the iniquity of us all.  7 He was oppressed and He was afflicted, Yet He opened not His mouth; He was led as a lamb to the slaughter, And as a sheep before its shearers is silent, So He opened not His mouth. 8 He was taken from prison and from judgment, And who will declare His generation? For He was cut off from the land of the living; For the transgressions of My people He was stricken. 9 And they made His grave with the wicked — But with the rich at His death, Because He had done no violence, Nor was any deceit in His mouth. 10 Yet it pleased the LORD to bruise Him; He has put Him to grief. When You make His soul an offering for sin, He shall see His seed, He shall prolong His days, And the pleasure of the LORD shall prosper in His hand. 11 He shall see the labor of His soul, and be satisfied. By His knowledge My righteous Servant shall justify many, For He shall bear their iniquities. 12 Therefore I will divide Him a portion with the great, And He shall divide the spoil with the strong, Because He poured out His soul unto death, And He was numbered with the transgressors, And He bore the sin of many, And made intercession for the transgressors.” (Isaiah 53:1-12 – NKJV)

So many details, such accuracy! It can only be the work of the Holy Spirit speaking through holy men of God!

People will always find a reason for their unbelief, but the Bible supplies sufficient, reasonable evidence for those who with a sincere heart want to believe.

Studying the Bible some difficulties arise only when or if we fail to consider its unity. If we actually think of it as one book, we discover the gradual Revelation of the Person of God, His Trinity, His plan for the salvation of mankind, wonderfully manifested in Jesus Christ, our Lord and Savior.

In Hebrew 1:1-2a we read: “God, who at various times and in various ways spoke in time past to the fathers by the prophets, 2 has in these last days spoken to us by His Son.” (Hebrews 1:1-2 – NKJV)

John says something quite similar, but with different words:

“For the law was given through Moses, but grace and truth came through Jesus Christ.” (John 1:17 – NKJV)

But why a gradual revelation? Why didn’t God simply tell us everything, all at one time?

These are questions I personally asked myself, too. Then I considered that there is no reason to blame God for something that even an average writer does himself, hoping to write a decent book. Imagine a mystery tale unfolding everything in the first page: it wouldn’t be a mystery anymore.

Who would want to read such a book?

At the same time, imagine a school book that will not gradually introduce a subject, but speak to the student of quantum physics before introducing him to law of gravity or the description of the atom.

I teach English – though not professionally. I would never teach a new student by starting with, say, the future progressive, or the “if” sentences. I begin with the alphabet – unless my student is already at a good level. Also, I try to speak slowly, using words he or she knows. Otherwise, he would not learn but simply be more confused than when he started the lesson.

Is it such a scandal if the same happens in the Bible?

Some mistakes made by certain interpretations are due to the simple fact that some fail to see the continuity between Old and New Testament.

For example, Jehovah Witnesses fail to see that it was no change in the Person of God, but more light that showed us that the Son of God and the Holy Spirit are God with the Father. We find hints in the Old Testament, but they became clear only in light of the New.

I know it’s not easy for the average Christian today, to be confronted by all the intellectual attacks coming from every direction: unbelievers, liberals, etc. It is not always easy to be able to answer to everyone. It takes rhetorical skills, linguistics, historical knowledge, which sometimes seems to fail us – this is how I feel myself too. Very often it is hard to argue against those who, even for no rational reason, just question the Christian faith – they are always more and more, in a world where there is a rampant propaganda against everything that us believers hold sacred and dear.

As it is for many other spiritual truths, besides the natural reasoning and evidence found in the physical, a Christian perceives in his spirit that the Bible, the Holy Scriptures are the Word of God, inspired by the Holy Spirit. When reading those pages, the heart of stone is turned into a heart of flesh, the perception of the self and reality changes, as we see everything through the eyes of God.

Some time ago a friend of mine – David – told me: “Reading the Bible … I don’t know how to prove it, I cannot even explain it with words, but I feel something special: it is the Word of God.”

It is true: it is something spiritual and by consequence so difficult to explain in the natural.

When we read the Bible the Holy Spirit literally speaks to our hearts, teaches us, guides us, sustains us, comforts us, delivers us, gives us strength and hope, courage, guidance, a goal, a reason to live, something worth living and even dying for. In every passage of Scripture God reveals Himself and sheds more light on our path.

This is my personal experience and I am sure it is what every true believer feels about the Scriptures.

We often are criticized because of the need we feel to share our beliefs with others – when people jump and scream in stadiums only for a game! – but since we found something so beautiful and precious not only we want to share it with others, but we dare feel guilty if we don’t. (So, please, bear with us)

In conclusion of this chapter, there should not be any doubt for the believer that the Bible is a collection of books, but it is also and absolutely One Book.

Why, my soul, are you downcast? Why so disturbed within me? Put your hope in God, for I will yet praise him, my Savior and my God.
Psalm 42:11